May 8, 2019 Durga Grade XI NEB Syllabus Plus 2 Arts Syllabus Plus 2 Education syllabus Plus 2 level syllabus Syllabus
Learning begins as life is exposed to this world and it is advanced with the curiosity around one’s life. Every human being behaves on the basis of knowledge, he has learned first by thinking and then imitation. In this whole process, Philosophy NEB Syllabus helps students.

Disclaimer: This is the old syllabus of NEB.
For 2076 Upadted syllabus with PDF download option,
visit: NEB 2076 Updated Syllabus 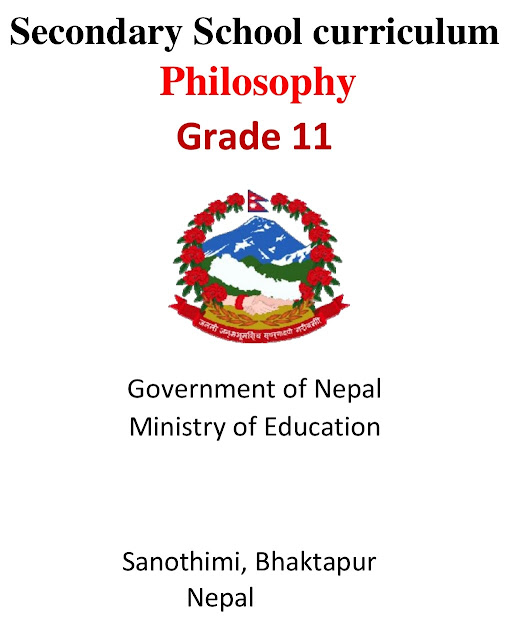 I. Introduction of Philosophy NEB Syllabus

There shall be two papers. In the first year, the students will have to study paper I Deductive Logic which carries 100 marks. In the second year, they have to study in section ‘A’ Inductive Logic carrying 70 marks, and section ‘B’ with the definition and importance of philosophy, and Buddha’s teachings of Four Noble Truths which carry 30 marks.
Learning begins as life is exposed to this world and it is advanced with the curiosity around one’s life. Every human being behaves on the basis of knowledge, he has learned first by thinking and then imitation. The process of thinking involved in learning develops some ideas and beliefs on the basis of which an individual leads his life and so it is said that every human being lives his life according to some metaphysics and so it is also regarded that the view in accordance with which one leads the life is the choice between good and bad metaphysics and not between some metaphysics and no metaphysics. So the study of philosophy as a parent study of all kinds of studies is continued and hopefully, the study will help promote our social values with proper processes of thinking.

Man is a man because of thinking power and for systematizing this aspect man has developed some instruments from ancient times in some or other way. Such instruments are in use even today in the study of different branches of study. For example, if one has to find out a general fact, one has to observe many particular instances relating to that fact, and only after such observations one will be able to prove that fact and if may particular instances are seen and if one is eager to know what will be the conclusion of these instances, then one will have to observe many instances and then be able to draw & conclusion. Within this process, we have other means also such as perception, comparison, and testimony which are also regarded as the sources of knowledge as they help us in accumulating knowledge relating to our lives and this universe. The word ‘philosophy’ itself is regarded as the study relating to the ‘love of wisdom’ which means wisdom relating to life in this universe. In this context, the very short and essential teachings of Lord Buddha, the son of our Nation are prescribed.

The specific objective of the Philosophy Syllabus course is to develop an adequate and accurate reasoning capacity of the students through the different logical units included in the course of study.

The character of Logical definition, Rules of definition, and their violations leading to fallacies and limits of the definition

Nature of logical division, Rules of division, and their violation leading to fallacies and division by Dichotomy.

The opposition of proposition, Subalternation-contrary-subcontrary and contradictory

Inference: Meaning and classification of inference (Immediate and Mediate inference or syllogism)
Immediate Inference- conversion, obversion, contraposition, and inversion. Syllogism: Definition, characteristics, and analysis of syllogism, Figure, and moods of Syllogisms- General syllogistic rules and their violation leading to fallacies determination of general valid Moods(in all the four figures) special rules of each of the four figures, construction of valid moods, corollaries, and testing.
Mixed syllogism: classification of mixed syllogism
a.       Hypothetical, the categorical syllogism, its meaning, rules, and fallacies.
b.      Disjunctive categorical syllogism, it’s meaning rules and fallacies
c.       The dilemma, its structure forms, construction of dilemma, refutation of dilemma, rebuttal, and testing of dilemma

Sources of knowledge according to Gautama: perception, Inference, comparison (Upaman), and verbal testimony.

1.      Deductive logic (in Hindi)- A.K. Verma
People who read this may also like to read  All others Grade XI/XI NEB Syllabus.
Or Download All NEB updated syllabus NEB 2076 Updated Syllabus