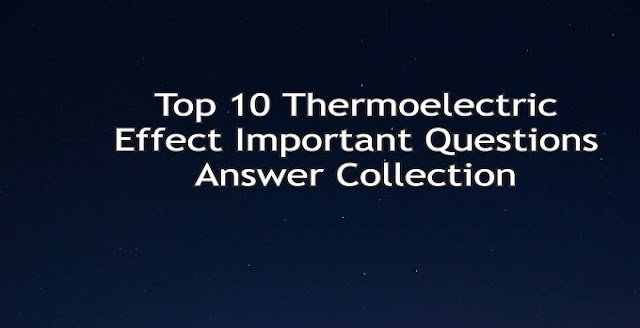 NEB  Intermediate Science Faculty Grade XII Physics: Thermoelectric Effect very important Question answer collection is listed below and it contains Thermoelectric effect short question collection with the solution (answer).If you like this then feel free to share with your friends on different social media.

Ans. If we keep the junctions of two dissimilar metal making a loop at different temperatures, a current flows through it. An e.m.f. appears across the junction and is responsible for this current. This e.m.f. is called thermo-electric e.m.f. The value of thermo e.m.f. depends on :

3. How does the thermo-electric e.m.f. vary with the temperature?

5. What do you mean by Peltier’s effect?

Ans. When a current is passed through a thermocouple whose junctions are at the same temperature, heat is evolved at one junction who is thus heated and heat is absorbed in the other junction which is cooled. This is known as Peltier’s effect. This is the inverse see beck effect. If the direction of the current is reversed, the previous cold junction becomes hot.

6. What is the Thomson effect?

Ans. The absorption or evolution of heat when current is passed through an unequal heated conductor is called the Thomson effect. Heat absorbed or evolved in a small section of a wire is proportional to both the charge passed through it and the difference in temperature of the sections. There two types of Thomson effect:

7. Why is a lead metal used as a reference metal in thermoelectricity?

8. What is the effect of thermo-electric currents for precise measurement of current flowing in the circuits?

9. Seebeck effect is the resultant of Peltier’s and Thomson’s effects. Explain.

10. What are the two factors on which thermo-electric e.m.f. produce in a thermocouple depends?